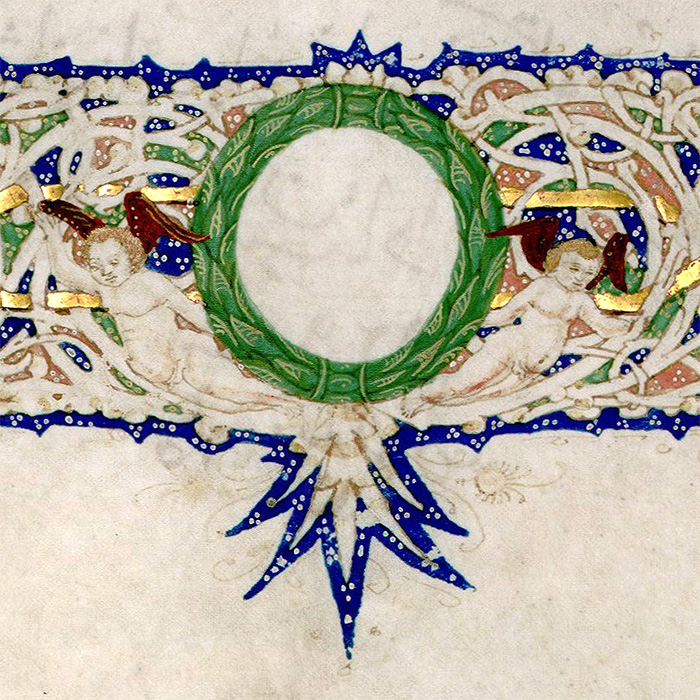 The codex contains the famous collection of imperial panegyrics.

The field dedicated to the coat of arms on the title page remains blank. The fact that the codex was taken to Istanbul and the guilded chased edges of the codex implies that the volume belonged to the royal library in Buda. János Csontosi classifies this codex to the “probable Corvinas” (Csontosi 1877, 184–185). Edith Hoffmann and Ilona Berkovits do not consider this volume a Corvina. Csaba Csapodi does not classified the volume as an authentic Corvina (Csapodi 1973, Nr. 931) but later he accepted the codex’ identification as a Corvina (Csapodi 1990, Nr. 17). Edit Madas lists among the authentic Corvinas but with a question mark (Madas 2009, Nr. 152).

The assemblage of the double leaves is false at a certain point. Gathering 13 (ff. 121–130) consists of five double leaves the two central ones of which were bound in the wrong order. The mistake seems to have taken place when the codex was made up. From f. 63 on, another modern hand corrects the mistakes of the previous modern hand. For this reason, some leaves have double foliation when the first hand needed to be corrected. Of the two foliation, the later one (smaller in size) is to be followed.

The margins wear the traces of more coeval users’ hands.

The text of the manuscript was analysed with philological perspectives by Jenő Ábel (Ábel 1879, 78–84).

Dethier observed and described that the codex had leather binding (Dethier, Inventory 1, Nr. 6). His observation is confirmed by the edges characteristic of the Corvina leather bindings as well as the brown traces in the margins of the former pastedowns.

One of the flyleaves (f. IIv) carries a nineteenth-century identification mark, made probably in the Saraı: No 15.

The codex was taken from Buda to Istanbul probably in 1526 and donated to the Youth of the University of Budapest in 1877 by the Ottoman emperor, Abdul Hamid II. The present leather binding was prepared for this occasion in Istanbul. The dedication is copied in Turkish and in golden ink on ff. 1v–2r, which says – based on Béla Erődi’s Hungarian translation – as follows: This codex is from among the books that were kept in the imperial library Topkapı since the time his Majesty, the legislator Chan Suleiman the Magnificent – Donated by the Padishah of the Ottoman Empire, his Majesty II. Abdülhamid to the University of Hungary. 1294. rebiü’l-evvel  25th [9th April 1877].

The ff. 1–4 are difficult or impossible to read because the parchment was infected. The codex was restored by Ágnes Horváth in the Conservation Laboratory of the National Széchényi Library in 1987.