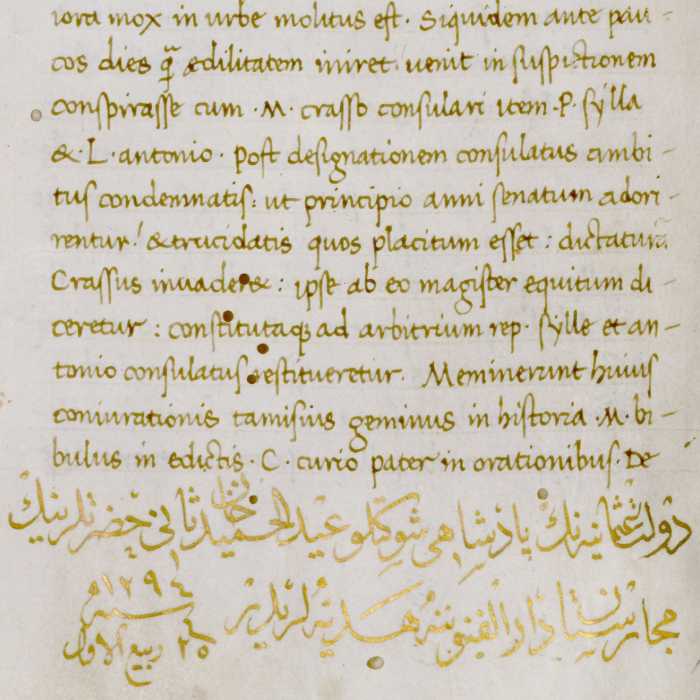 The codex contains Suetonius’ famous work, the “Lives of the Caesars” (ff. 2r–179r).

From among the initials, only the one of five lines’ extent indicating the letter G has been preserved at the beginning of the “Life of Augustus” (f. 26r), the others have been cut off together with the title pages.

Although the title page together with the possible coat of arms of Matthias Corvinus is missing, the volume must have belonged to the royal library. This is demonstrated both by the guilded and chased edges, characteristic of the leather Corvina bindings, and a note on the fall of Bécsújhely (Wiener Neustadt) on 17 August 1487 (f. 181r): 1487 17 Augusti in dicionem Regis Mathie per longam || obsidionem […] venit uiihel imperialis civitas Austrie. (the square brackets enclose a word that is unreadable).

The text of the manuscript was analysed with philological perspectives by Jenő Ábel (ÁBEL 1879, 24–27; see also BEREGSZÁSZI 2005).

The margins are furnished mostly with highlighted word in red ink by the scribe Petrus Cenninius’ hand but in addition there are the notes of at least three other coeval hands two of which have left notes in Greek as well. The weakly readable distichon on the upper part of f. IIr – an inscription from the ancient Roma (cf. BEREGSZÁSZI 2005) – originates in the hand of one of them: Iratus recole quod nobilis ira leonis || In sibi prostratos se negat esse feram (published by Csontosi 187). Contrary to the findings of previous research (CSAPODI-GÁRDONYI 1984, 137, Nr. 102; BEREGSZÁSZI 2005), the codex does not contain any notes from archbishop Johannes Vitéz de Zredna (c. 1408–1472).

The guilded chased edges of the codex imply that the volume received a leather Corvina binding. This is supported by the brown traces in the rims of the former pastedowns. Dethier does not mention the binding of the manuscript (DETHIER, Inventory 1, Nr. 14.).

One of the flyleaves (f. IIv) contains a nineteenth-century identification mark: No 4.

The codex was taken from Buda to Istanbul probably in 1526 and donated to the Youth of the University of Budapest in 1877 by the Ottoman emperor, Abdul Hamid II. The present leather binding was prepared for this occasion in Istanbul. The dedication is copied in Turkish and in golden ink on ff. 2v–3r, which says – based on Béla Erődi’s Hungarian translation – as follows: This codex is from among the books that were kept in the imperial library since the time his Majesty, the legislator Chan Suleiman the Magnificent – Donated by the Padishah of the Ottoman Empire, his Majesty II. Abdul Hamid to the University of Hungary. 1294 (1877) 25th Rebbi ül evvel.

The codex was restored by Mária Czigler in the Conservation Laboratory of the National Széchényi Library in 1984.