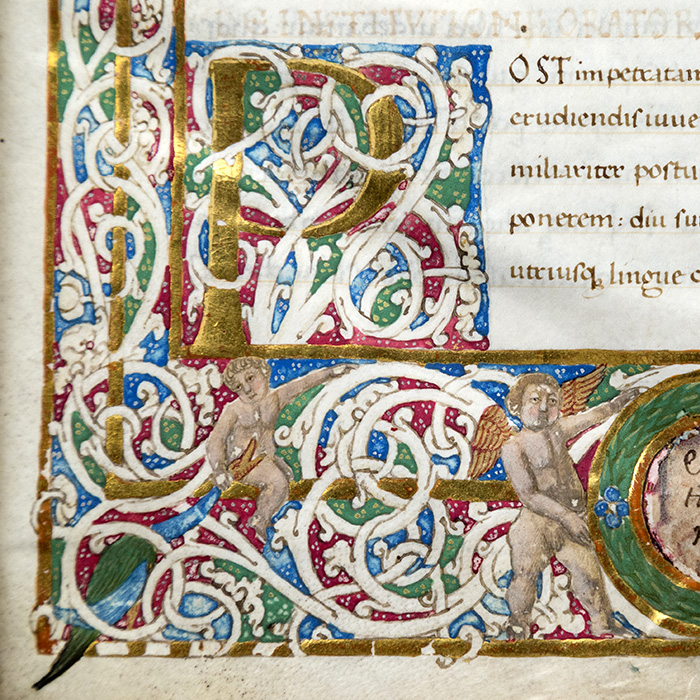 Quintilian’s great work was discovered by Poggio Bracciolini in 1415–6, in the monastery of Sankt Gallen and made an enormous influence on the rhetoric of Renaissance and the Early Modern Period. The white vine decoration of the codex resembles the style of Gioacchino de Gigantibus, an illuminator from Rothenburg who worked in Rome where the manuscript was probably made. The coat of arms was scratched out and replaced with the name of the author. The removal of the possessor’s note most often characterized the Corvinas that were taken out of the still existing collection during the three decades after the death of King Matthias and not quite in the legitimate manner. We can find this feature in a visibly great number of the Corvinas acquired by Johann Alexander Brassicanus, humanist of Vienna. Either the coat of arms was scratched out or overwritten, or the lower part of the title-page was cut out with the coat of arms on it. Sometimes the entire title-page was removed, or like in the case of the Quintilian Corvina, all the one-time possessor’s notes were erased including Matthias’s coat of arms on the leather binding destroyed by overprint. According to an original note on a flyleaf preceding the title-page, Brassicanus acquired the manuscript on December 6, 1526 in Buda. (Edina Zsupán)