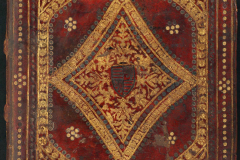 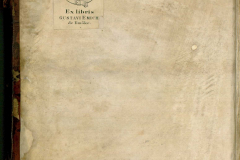 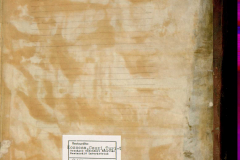 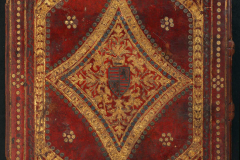 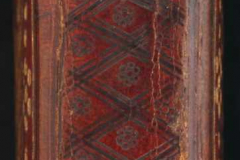 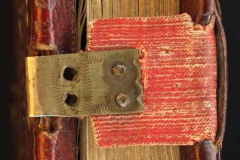 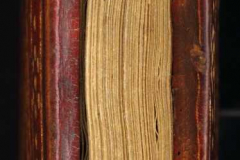 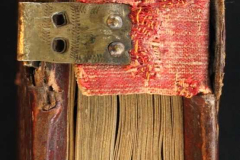 Corvina under shelfmark Cod. Lat. 370 has a red full leather binding with gilded, blind-tooled and painted decoration featuring leather onlays. Decoration of the left and right boards is identical, with the exception of the titling gilded on the right board. At the center of the boards, King Matthias’ Hungarian-Bohemian royal coat-of-arms and crown are visible. The book was originally fastened with four pairs of left-to-right fastening, hooked clasp-type brass clasps. The board is made of beech wood. The bookblock, consisting of parchment quires, is sewn all along on four double white leather sewing supports with kettle stitches. The edge is gilded and gauffered on all three sides. The endband core is white leather, sewn to the quires; its decoration was sewn with three types of color threads, one of which is a metal thread. The codex features a compound endband. The corvina binding is not the first binding of the book. It was restored in 1989-90 in the Restoration Laboratory of National Széchényi Library.

The present corvina belongs to the bindings featuring the so-called emphasized central panel. The rich decoration consists of single tools. The boards are framed by blind-tooled and gilded lines, gilded and painted leather-onlay double circles and a blind-tooled knotted pattern. The central field is square-shaped; its floral corner ornaments and the tulip-row frame are gilded. The central panel is a square set on its corner and featuring arched sides. At the center, there is King Matthias’ Hungarian and Bohemian royal coat-of-arms and an open crown. The central panel is filled with rich, gilded floral decoration.

Decoration of the left and right boards is identical, with the exception that at the top of the right board, there is the titling instead of the row of gilded double circles.

Just like in case of other leather corvina bindings, the boards are framed with blind-tooled triple lines, and then by a gilded line, along which gilded leather onlay double circles are running, arranged in a floral shape at the mid-section of the board edges. The knotted-pattern frame, characteristic of corvinas, is surrounded by a gilded line. The pattern is composed of straight and arched notched knotted ornaments, as well as of tiny double circles. Basic color of the onlay circles is light, painting must have been blue but, due to darkening, the color is hardly discernible. Along the shorter edges of the board, this frame is thicker, while on the longer edges, it is thinner. The square-shaped central field is framed by a gilded line, its corners are filled with gilded floral motifs (tulip variations, stem, circle). Then there is a row of gilded tulips running, surrounding the entire central field. Twelve rosettes, placed at equal distance, are embedded into the row. The direction of the tulips turns at the rosettes. Beside the tulip frame bordered by gilded lines, a row of leather onlay double circles, painted blue, closes the row of frames in the central field. The central panel is a square, set on its corner and featuring arched sides, that is framed by a row of gilded eggs enclosed by leather onlay double circle rows, one of which was painted green, while the other was painted blue. The egg row is an architectonic element used on corvinas featuring architectonic decoration structure; it is made up of the alternation of one egg and one arrow tool. The core of the central panel is framed by a gilded line, and a set of motifs consisting of gilded single tools fills the surface. At the center of the board, there is King Matthias’ quadrifid royal coat-of-arms, used frequently on corvina bindings. There is a double-tailed (Bohemian) lion, facing left, in the second and third fields of the shield, while in the first and fourth fields, there are four cuts each. Microscopic study showed scattered blue and green particles in the painted frame of the coat-of-arms. There is a gilded crown above, the opening of which had been painted blue. The coat-of-arms is surrounded by a set of rich, tendrillar floral motifs, built evenly, symmetrical to the vertical and horizontal axes. It consists of tulips, calyx flower and leaf variations, and from the stems connecting them, as well as of tiny space-filling circles.

On the right board, at the head, gilded titling is running instead of gilded double circles. Place of the titling is marked by incised lines.

The spine features blind-tooled decoration. The spine fields are framed by triple lines, and they form a diamond net pattern within the fields. One six-petal rosette each had been tooled in the diamonds. Also triple lines are running along the division of the double sewing support.

The book is made of goatskin; it has a red full leather covering. The corners are mitered. The turn-ins have pared edge.

The boards are made of beech wood. In the present binding, the boards are fully hidden. Steep external bevels can be observed along the spine edge in its full thickness. On the inside, it is straight. On the inner face of the boards, there are internal bevels along the edges; the outer face is slightly curved in a greater width.

Shallow recesses were cut into the left board to accommodate the straps, while on the right board the shallow recesses also served to accommodate the fastenings. No recesses were made for the turning of the straps on the edge of the board but, due to the bevels, the edge of the board had been ruptured in a width below the strap, and the excess leather was folded back. Endings of the sewing supports extending beyond the width of the spine were fixed onto the board with two iron nails each.

The book has a tight back; it features four duplicated double sewing supports.

The spine is straight. The caps are in line with the boards, slightly overlapping the endband. The endband core makes a sewing support-like appearance on the spine. At the base and in the divisions of the sewing supports, impressions of the tying-up of cords are visible; they run onto the beveled edge of the board.

Originally, the book was fastened with four pairs of left-to-right fastening, hooked clasp-type brass clasps. Catch plates on the board survived in full; they were fixed with brass nails. Out of the catch plates mounted on the ribbon, the ones at the head and the tail survived. The clasps are held by a red textile ribbon, delicately striped with yellow, which is fixed beneath the leather covering. The ribbon at the head has been restored. The catch plate on the ribbon was folded in two; following folding, it was decorated with piercing and engraving; finally, it was attached to the ribbon with copper nails. Only at the tail are the clasp-fixing nails the original ones. On the fore-edge, the catch plates mounted on the ribbon are missing, and only a fraction of the textile ribbons survived (the one at the top extends beyond the board, while the one at the bottom had been torn at the edge of the board). Unusual for corvinas, the fastenings on the right board had not been covered with leather; recesses to accommodate them were cut out later.

No trace of the fastening of a chain can be detected.

On the right board, at the head, there is a gilded titling running along: COMMENTV~ RETHORICOR؍

The bookblock consists of parchment gatherings, each consisting of four sheets. The parchment has a gentle velvety touch; the flesh side and the grain side are almost identical. On the leaves, ruling was made in ink and text field marking was bordered with double lines. At the bottom of the last leaf of the gatherings, a horizontally written catchword is legible.

During the representative binding program of the corvina library, the old binding of the book was replaced with an ornamented binding. As part of the replacement, it was sewn all along on four double, white leather sewing supports with kettle stitches. Raw-color, Z-twist sewing threads were used. Endings of the leather straps were led to the outer face of the board, where they were fixed with two iron nails. The former binding is clearly evidenced by the currently unused pierced sewing holes, which can be observed in the folding of the parchment sheets. On this basis, it can be concluded that previously the textblock had been sewn all along on three sewing supports with kettle stitches; pierced sewing holes had been marked with incisions. At the head of the last leaf, traces of rust, caused by three nails fixing the clasp, can be detected. These can also be part of the former binding. On the recto of the leaves, in the upper right corner, numbering written in red ink is running along, which had been made earlier than the book would have been provided with its corvina binding. (This is evidenced by the numbers cut off occasionally as a result of the trimming of the sheets; for example, page 12).

Two narrow parchment guards had been pasted on the first leaf, the origin of which is unknown.

The edge is gilded and richly decorated with gauffering on all three sides.

Currently, the endleaves are pasted down.

The endleaves at the left board are sewn one-fold parchment leaves. The first leaf is undersize (mainly at the head and the tail). Sewing thread and tiedown of the endband core are visible in the opening.

The book has no structurally separable endleaves at the right board. The last two leaves of the last gathering had been ruled for writing, however, there is no writing on them. On the recto of the last but one leaf, there is a vertical ruling to mark out the text field, but there is no ruling on the verso or on the last leaf following it. The sheets of the gathering are of the same size.

Currently, the last leaf is pasted down onto the board. Before restoration, it had not been pasted down, but there were traces of white adhesive both on the board and the endleaf.

There is no bookmark

The white leather rolled endband core was attached to the textblock in a separate session from sewing, with tiedowns. Tiedowns were made in each central sheet fold, nowhere reaching the kettle stitches. S-twist threads were used. The leather core was led to the outer face of the board; no fixing is visible, since it is hidden by the leather covering and the endleaf. A small piece is also missing from the corners of the board.

The endband features compound decorative stitches. Its leading threads are hidden. Decorative stitches were provided by the alternation of flesh-colored and green silk threads, and a metal thread corroded to bluish color. Based on analogies, it can be established that the metal thread is a strip cut from cupriferous silver foil, gilded on one side, and wrapped around a yellow silk gut thread.

The book was restored in 1989-1990 by Ildikó Beöthy-Kozocsa, Enikő Csuzi and Emese Turi-Turgonyi in the Restoration Laboratory of Széchényi Library. The leather sewing supports had been broken. Sewing of the last gathering had come down, so it was separated from the textblock. Damages of the leather covering and the parchment leaves were repaired; missing parts were completed. The clasp ribbon at the head, which had been torn in almost full width, was restored. The first and the last leaves were pasted down onto the board.