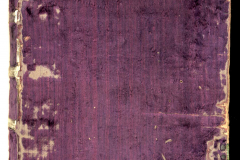 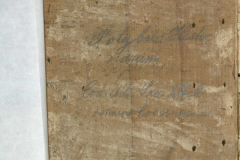 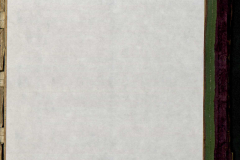 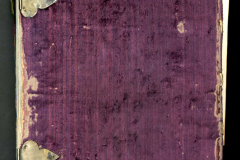 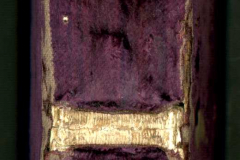 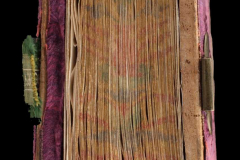 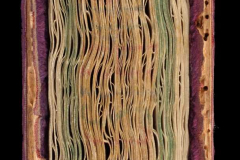 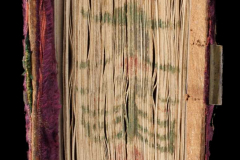 Corvina under shelfmark Cod. Lat. 234. has an undecorated purple full velvet covering. Originally, it was fastened with four pairs of left-to-right fastening, trefoiled, hooked clasp-type brass clasps. Only the catch plates placed on the board survived on the binding. The board is made of beech wood. The bookblock, consisting of parchment quires, is sewn all along on five double white leather sewing supports with kettle stitches. The material of the endleaves is also parchment; endleaves are sewn to the bookblock. The edge is painted, gilded and gauffered on all three sides; ornamental, tendrillar plant designs in red, green and blue colors run in parallel with the boards all along the edge, and they are placed in one column above each other. The author’s name and the titling painted on the fore-edge are bordered with green color. Foot of letters faces the left board. The endband core is white, rolled leather; its ornament is secondary-sewn with threads of three different colors, one of which is a metal thread. Saddle sewing was applied.

The edge is gilded on three sides (currently it is hardly visible at the tail), gauffered with small points, and painted in red, green and blue colors. Gauffering seems to have followed the contour of the ornaments. Ornamental, tendrillar plant designs run in parallel with the boards all along the edge; they are placed in one column above each other, with flower heads on the head-edge and tail-edge facing the endband, and the ones on the fore-edge facing the titling. Colors of edge painting and threads of the endband harmonize with each other.

The book has a purple full velvet covering. The material features irregular dark and light purple stripes, presumably due to the unevenness of fiber dyeing. Turn-ins extend to 25-30 millimeters on the inner face of the boards. The edge of the material is trimmed (no traces of trimming can be detected on the boards), except at the fore-edge turn-in of the right board, where the original, intact (green-purple) edge of the material, formed by weaving, is visible. Mitered corners can be observed. Several, not particularly deep scratch marks on the wooden boards suggest that the velvet was trimmed after it had been mounted on the board, and thus the corners were shaped.

The boards are made of beech wood; their external surface is shaped with a gentle curve around the borders in the form of peripheral cushions; the curves were shaped by grating the edges of the board. Traces of grating can be easily detected on the borders of the board, in an approximately 3-centimeter width. In addition to that, steep external bevels can be observed along the spine edge, the upper edge of the bevel is rounded. On the inner face of the boards, there are internal bevels along the edges; the spine edge also features bevels, but only in a narrow width.

Parts of the sewing supports extending beyond the width of the spine were led into the edge of the boards, where they run half a centimeter long, aslant, through tunnels to an outer channel of strap width on the surface of the boards.

On the inner side of the corners of the boards adjacent to the spine, an arched recess was drilled to lead the endband core out, which fits in channels (forming an approximately 45-degree angle with the edges of the boards) on the outer face of the board.

The boards are dried up transversely; currently they are short at the front, leaving the textblock sticking out under them.

The book has a tight back and is slightly rounded.

Under the velvet covering, there is a white leather spine lining, fully filling in the compartments and somewhat wider than the spine, which was pasted on the external bevels of the boards (trace of adhesive is visible on the left board).

At the head and the tail, a brown – most probably leather – layer can be detected under the white spine lining layer.

Catch plates on the right board survived in full; characteristic of the type, presumably smaller, rectangular clasps that had been on the straps were lost. Fastenings on the board are made of plates, they are undecorated. (The arc in the middle is peaked, while the right and left arcs are arched.) The cylindrical blockage part of the clasp extends beyond the edge of the board. All the surviving catch plates have six, instead of three, holes, the latter number of holes being necessary for mounting. Currently, the fastenings are fixed with three iron nails each, and right next to each of them there is a nail hole left empty. The only exception is the clasp at the tail-edge, where the nail serving to fix the peak of the catch plate is also missing. The mounting nails are tiny iron nails, almost without a head.

No traces of clasp fixing can be observed on the inner face of the board, so the nails do not pierce through the board (at the fore-edge, the board is covered by the turn-in of the velvet covering).

On the left board, in four shallow, rectangular clasp-strap recesses, fragments of textile ribbons forming the clasp strap can be detected. White, interwoven geometric patterns decorating the green textile ribbons are identical recto verso. Yellow threads are also visible in the ribbons. The edges are decorated with fringes.

The end of the straps was hidden under the velvet covering, in the recesses formed on the wooden board, and it was fixed with two large, hemispherical iron nails.

The nails can be found near the edge of the board (approximately 3-5 millimeters), parallel to it. Where the damage to the velvet allows an insight, endings of the iron nails and rust stains caused by them are visible on the inner face of the board

The author’s name and the titling are painted on the fore-edge in color letters. Foot of letters faces the left board.

The material of the leaves is parchment; all gatherings consist of five sheets, except the twentieth, last, gathering, which consists of four sheets. The text fields and the places of lines were marked with incisions on the sheets.

Miniatures had been pre-drawn with a pen, and then they were painted and gilded. Both shell gold paint and gold leaves were used for gilding.

Pen and ink drawings peeled off at some places, only their recesses can be observed on the leaf.

The gatherings are sewn all along on five double, presumably alum-tawed white leather sewing supports with kettle stitches. No signs of pierced sewing holes can be detected on the sheets. Raw-color, almost white, S-twist sewing thread was used. The core was filled with sewing thread. Parts of the sewing supports extending beyond the width of the spine were led into the edge of the boards aslant, through tunnels to an outer channel on the surface of the board, where they were fixed with two iron nails. Rusting caused by them is visible on the inner face of the boards.

The bookblock is slightly rounded; it was edge-trimmed after rounding.

The edge is gilded on three sides (currently it is hardly visible at the tail), gauffered with small points, and painted in red, green and blue colors. Gauffering seems to have followed the contour of ornaments.

Ornamental, tendrillar plant designs run in parallel with the boards all along the edge; they are placed in one column above each other. Flower heads on the head-edge and the tail-edge face the endband, and the ones on the fore-edge face the titling. On the fore-edge, the author’s name and title can be read in a green painted border; foot of letters faces the left board, from which it can be concluded that the volume was presumably stored lying on the left board.

The endband core is a white, presumably alum-tawed, rolled leather strap, attached to the textblock in a separate session from sewing, in a way that tiedowns were made in every gathering with the sewing thread near the kettle stitches, while the core was tightly filled with sewing thread. Decorative stitches are provided by the regular alternation of green and pink/flesh-colored silk threads and a metal thread corroded to bluish color.

Based on analogies, it can be established that the metal thread is a strip cut from cupriferous silver foil, gilded on one side, and wrapped around a yellow silk gut thread. The even distribution of the colors of the endband was achieved in a way that less thread, i.e. two threads from the thicker metal thread and the green silk thread, and three threads from the third color were used side by side. Saddle sewing was applied. A row of beads runs at the foot of the endband. S-twist embroidery threads were used.

The book was restored in 1989 by Zsuzsanna Lente in the Restoration Laboratory of National Széchényi Library. As the restoration documentation shows, restoration included dry cleaning, rust stains caused by nails were removed from the endleaves by a scalpel, repairs were made on the leaves and endleaves, missing areas were completed, and colors were fixed. Endbands were cleaned and repaired.

Modern, mechanical paper was pasted at four points on the inner faces of the boards. 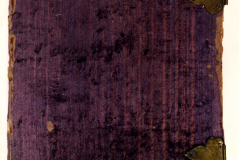 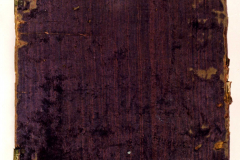 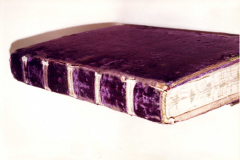 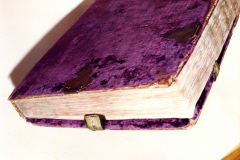 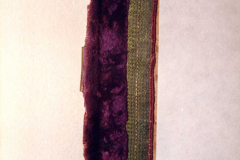 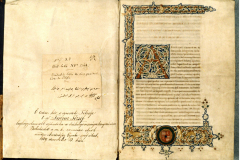 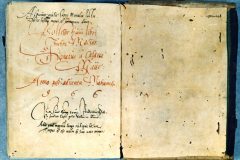 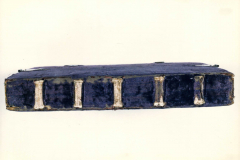 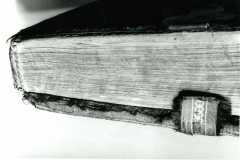 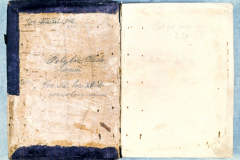 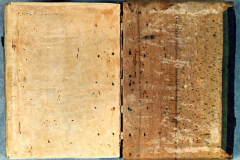 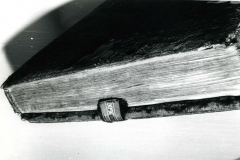