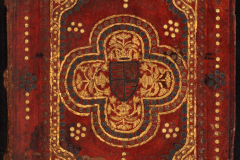 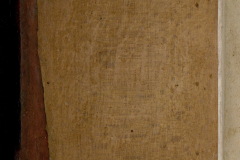 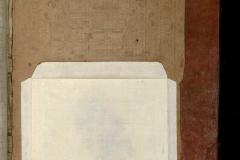 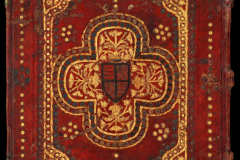 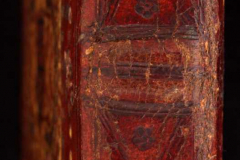 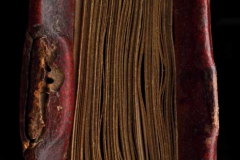 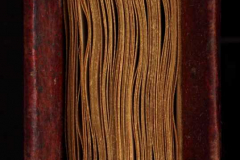 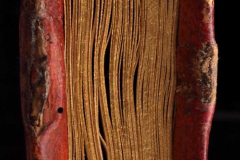 Corvina under shelfmark Cod. Lat. 429 has a gilded, blind-tooled, painted red full leather binding decorated with onlays. Decoration of the left and right boards is identical, with the exception of the titling gilded on the right board. At the center of the boards, King Matthias’ Hungarian-Bohemian royal coat-of-arms and crown are visible. The book was originally fastened with four pairs of left-to-right fastening, hooked clasp-type brass clasps. The board is made of beech wood. The bookblock, consisting of parchment quires, is sewn all along on three double white leather sewing supports with kettle stitches. The edge is gilded and gauffered on all three sides. The endband core is white leather, sewn to the quires; its decoration was sewn with three types of color threads, one of which is a metal thread. The codex features a compound endband. The book was restored in 1981-82 in the Restoration Laboratory of National Széchényi Library.

The present corvina belongs to the bindings featuring the so-called emphasized central panel. The rich decoration consists of single tools. The boards are framed by blind-tooled and gilded lines, gilded and painted leather-onlay double circles and a blind-tooled knotted pattern. The gilded circles framing the central field are not onlays. The central field is rectangular; the floral corner ornaments are gilded. The central panel features a four foiled form. At the center, there is King Matthias’ Hungarian and Bohemian royal coat-of-arms and an open crown. The central panel is filled with rich, gilded floral decoration.

Decoration of the left and right boards is identical, with the exception that at the top of the right board, there is the titling instead of the row of gilded double circles.

The spine is decorated with blind-tooling. Triple lines are running along the outlines of the spine fields and in their diagonals. Blind-tooled six-petal rosettes were tooled into the triangles created by drawing diagonals.

The boards are made of beech wood. Steep external bevels can be observed along the spine edge, while on the inside, it is straight. The three edges feature internal bevels, while the outer face is straight. The inner face of the boards has a rough surface; traces of the tools used for shaping can be detected.

Ends of the leather straps of the sewing supports extending beyond the spine were laid in recesses on the outer face of the wooden boards and fixed with two wooden nails.

Part of the endband core extending beyond the spine is covered with leather.

The book was fastened with four pairs of left-to-right fastening, hooked clasp-type clasps. The material of the straps is leather, the color of which is identical to that of the cover leather. The strap is folded, the fold is edge-mounted, the inside contains a parchment guard. Currently, the straps are truncated, only the part hidden under the covering had survived, and the catchplates mounted on the strap had also been lost. The straps were fastened to the boards with two wooden nails each. Catchplates sunk into the right board fully survived; they were also fixed with wooden nails.

At the top of the right board, impression of the fastening element of a chain, and the trace of the mounting nail, piercing through the board, are visible.

At the top of the right board, in place of the frame, consisting of a row of double circles, there is a gold-plated titling: “DE CONSIDERATIONE”. The titling had been created by tooling the separate letters next to each other; this technique is revealed by the incision marking the line.

The quires consist of four sheets, with the exception of the seventh gathering, which consists of five sheets, but its first leaf had been cut out. Interesting thing about the cut-out leaf is that only the lines marking out the location of the text field were ruled on the surviving stripe, the lines marking text rows cannot be found on them. At the bottom of the last leaf of the quires, at the spine, a catchword running perpendicular to the main text can be detected. The only exception is the quire with the different number of sheets, which has no catchword on it, and which represents the very border of the second and third texts of the book. (The end of the first text and the beginning of the second text are to be found within one and the same quire.)

The quires are sewn all along on three double white leather sewing supports with kettle stitches. Endings of the leather straps were sunk into the outer face of the boards, and there they were fixed with wooden nails. The spine was provided with white leather parchment lining, filling the spine fields and hanging into the opening breadthways.

The edge is gilded and gauffered on all three sides.

The endleaves at the left are sewn one-fold parchment leaves.

There are no structurally separable endleaves at the right. The last two sheets of the last gathering had been ruled, but there is no text on them.

The book features a white leather endband core which was attached to the textblock in a separate session from sewing, in a way that tie-downs were made in each central sheet fold. At no place do the tie-downs reach the kettle stitch.

Compound decorative stitch was used; there is an alternation of multiple green and pale red silk threads and two metal threads corroded to greenish color. Based on analogy, the metal thread is a strip cut from cupriferous silver foil, gilded on one side, and wrapped around a yellow silk gut thread. All three are S-twist embroidery threads. The green thread is thicker than the one with dark flesh color.

The codex was restored by Mrs. László Ballagó in 1981-82 in the Restoration Laboratory of National Széchényi Library. The spine covering was complemented with calfskin and one of the corners was repaired. Following cleaning, Johannes Fabri’s printed ex libris was placed back onto the inner face of the left board. The endleaves were repaired with parchment. The paper label detached from the spine was put in a bag pasted on the inner face of the right board. A storage box was made for the book.