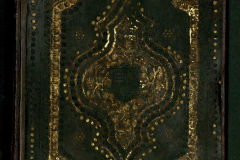 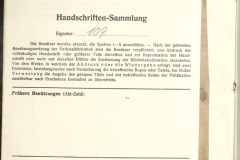 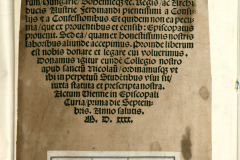 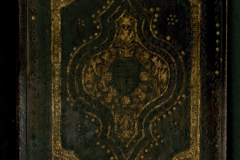 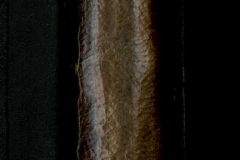 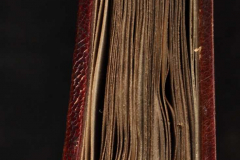 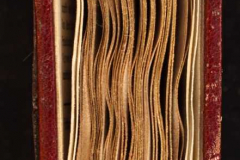 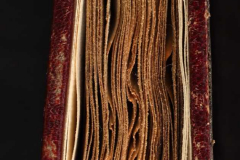 Corvina under shelfmark Cod. Lat. 423. has a reddish full leather binding with gilded, blind-tooled, painted decoration, featuring leather onlays; leather of the binding is darkened. With the exception of the gilded titling on the right board, ornamentation of the left and right boards is identical. During a previous restoration, board coverings were swapped. In the center of the boards, King Matthias’ coat-of-arms is displayed. The textblock, consisting of parchment gatherings, was re-sewn. Material of the endleaves is also parchment. Edge of the book is gilded and gauffered on all three sides. The book was restored in the early 20th century in Vienna.

The current corvina belongs to the so-called emphasized central panel bindings. The decoration is made up of single tools. Due to the trimming of the covering, the outermost surviving frame consists of gilded and painted double circle onlays followed by knotted pattern. The central field is oblong, its floral corner ornaments and tulip-row frame are richly gilded. The central decoration is an arched complex form. There is a coat-of-arms in its center, surrounded by a luxuriant, gilded floral decoration.

Ornamentation of the left and right boards is identical, with the exception that at the top of the right board, the titling (“GENELOGIE DEORUM”) can be found in place of the gilded row of double circles. 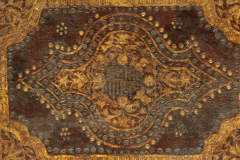 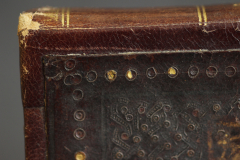 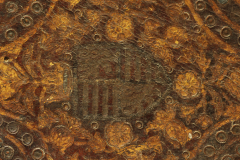 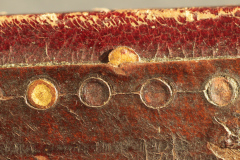 The trimmed, incomplete cover leather probably lacks the board-framing external blind-tooled triple lines and the single line running close to it. The surviving first frame is formed by double circle leather onlays; at the half of the sides, seven double circles are arranged in a floral form. Then follows a thick blind-tooled line running around in rectangular shape. The area between the blind-tooled line and the central field is filled with thickly placed blind-tooled, straight and arched notched knotted patterns, as well as with small double circles located between them. On the shorter edges of the board the frame is thicker, while on the longer edges it is thinner. The central field is highly ornamented; all of its components are gilded, partly silvered or painted. The oblong central field is framed by gilded line, the corner ornaments feature gilded floral-tendrillar decorations (double leaves, tulip variations, small five-petal flower, connecting stems). Then a richly gilded frame, consisting of adjacent, outward-turning tulip heads, is running around. Last in the array of frames is a frame formed by double circle onlays painted blue (due to lack of space, the frame also features a smaller version of double circle in the middle of the longer edge).

The outermost of the frames surrounding the central decoration is a row of gilded double circle onlays. Then the pair of gilded line–blue double circle onlay frames is repeated twice. The core of the central decoration is framed by gilded line, and the entire field is filled with a network of motifs consisting of gilded single tools. The center of the board features a quadrifid coat-of-arms. The frame and the dividing lines of the coat-of-arms, as well as the bottom part of the crown must have been painted, originally to bluish black. In the second and third fields of the coat-of-arms, there is a single-tooled double-tailed (Bohemian) lion, facing left; in the other two fields, there are four cuts, respectively. The currently perceptible blackness of the motif suggests that originally it must have been silvered. There is a gilded blind-tooled crown stamp above the coat-of-arms. At the top, from the crown, on the other three sides, from a six-petal flower head, respectively, a system of luxuriant tendrillar floral motifs is growing out, arranged systematically, symmetrically on the vertical and horizontal axes. Components include: pair of peltate leaves, calyx flower, tulip variations, lily, small double circles, stems. 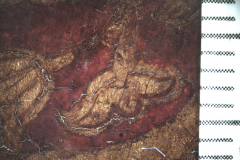 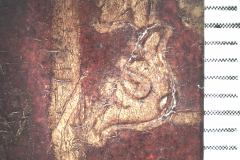 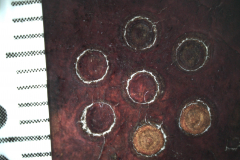 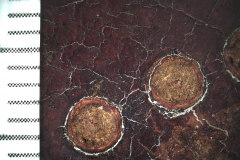 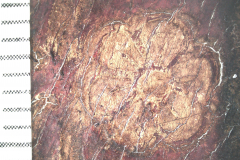 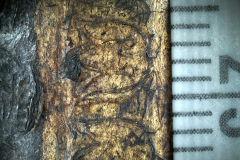 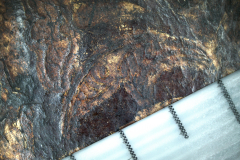 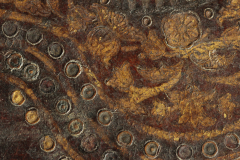 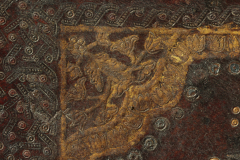 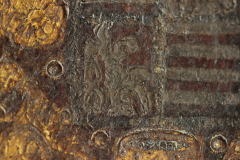 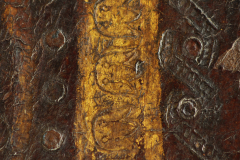 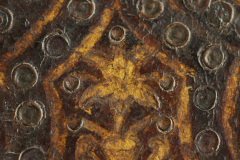 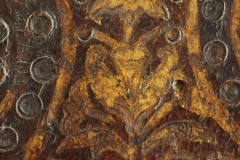 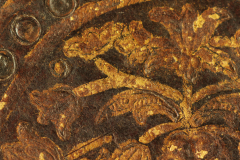 At some places, thin incisions can be detected, which were to mark the places of gilded double circle onlays. Incisions drawn by the gilding master served as guiding lines. That the gilded double circles were onlays is proved by a leather disk which was detached during rebinding, and which moved and subsequently stuck between the old and new cover leathers.

Spine covering is brand new; it is decorated with gilded titling and lines.

Originally, the book had a reddish goatskin binding. Only fragments of it survived, in the form of two trimmed rectangles, which have smoothened and darkened from interventions and gauffering. At the top of the original right board, at the foot of the titling, there is a tiny hole (it is probably the trace of a chain); at the top of the left board, a larger missing area can be detected. In the 20th century, the covering was completed with brown spine leather and reddish leather board borders in Vienna-based Hofbibliothek. Current turn-ins are straight-cut; the corners are folded overlapping.

On the first and the last sheet, the presumably original cut-in is pared, impression of its uneven edge can be detected.

The book was provided with its current paper boards during the rebinding which was made in Vienna in the 20th century.

There is no trace of fastenings on the current, rebound book.

The gilded titling (“GENELOGIE DEORUM”), framed by a thick gilded line, was originally located at the very top of the right board. However, during rebinding coverings of the two boards were swapped, so now the titling can be read on the left board.

The last three sheets are empty, ruled, and are of the same size as the other sheets of the textblock.

Edge of the book is gilded and gauffered on all three sides.

From the original endleaves at the left board, currently, there is a parchment leaf, which is undersize on three sides in relation to the textblock. The new endleaves, originating from the 20th century, are two sewn pairs of leaves, the first leaf out of which is a paste-down. Watermark is visible on one of the leaves.

We are uncertain about what the original endleaves at right board looked like. Currently, there are three leaves, the last of which is a paste-down.

Endband was mounted on the book when it was rebound in Vienna in the 20th century. Endband is green and white, mechanical, pasted and spine-width.

Endband was mounted on the book when it was rebound in Vienna in the 20th century. Endband is green and white, mechanical, pasted and spine-width.

As part of the rebinding and restoration project of Vienna-based Hofbibliothek in the early 20th century, the book was given a new binding. With the original pierced sewing holes preserved, the textblock was re-sewn. New endband and endleaves were mounted on the book, and it was also provided with new paper boards. The original leather binding was trimmed, causing a mutilation of the ornaments. The book was provided with a new leather spine covering and with board borders. Covering of the two boards were swapped. The covering, which had originally been on the left board, was pasted back on the right board upside down. The new spine leather features gilded titling and decorative lines.