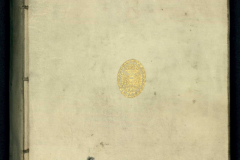 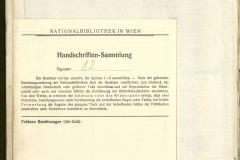 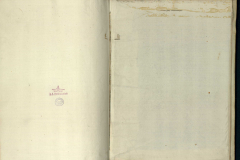 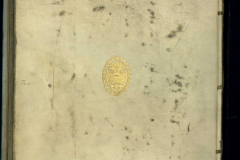 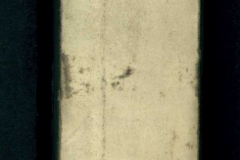 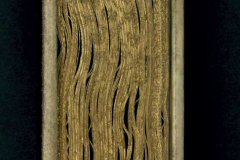 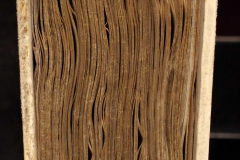 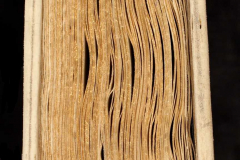 Natural-color, hardboard, full parchment binding. The binding does not feature book squares bending on the edge; parchment sewing and endband cores had been pulled through the opening of the binding. The boards feature gilded super ex-libris. The edge is gilded and gauffered.

Super ex-libris had been gilded on the boards, with a coat-of-arms in the center; at the head and tail of the right board, an also gilded titling referring to the proprietor and the year of binding is visible. Unlocking of the abbreviation at the head is the following: E[x]. A[ugusta]. B[ibliothe]C[a]. V[indobonensis]., at the tail: 17. G[erardus]. L[iber]. B[aro]. V[an]. S[vieten]. B[ibliothecarius]. 55.) The binding was made for the Imperial Court Library of Vienna at the time when Gerard van Swieten served as a librarian. Units of the titling are enclosed by gilded stars.

Gilding of the letters was helped by a line scratched on the parchment.

No data are available on the covering of the original binding of the codex. Gauffered gilded edge is characteristic of leather corvina bindings, however, the brown fragments adhered to the spine of the book via sizing, which had probably survived from the leather covering and can be detected beneath the opening spine covering, refer to a non-corvina-type binding. The spine had been lined with white leather on the examined corvina bindings.

Covering of the present binding of the codex was made of natural-color, thick and rigid parchment. The full parchment binding does not feature book squares bending on the edge; endband and sewing cores were pulled through the opening of the binding. Ends of the parchment strips used for sewing, which extended beyond the spine. were cut in up to the spine, in a way that a narrow and a wider strip should be formed. Only the narrower strip was pulled through the opening, while the wider one, cut shorter, was pasted down on the inner face of the board. At the front of the book, the upper part of the strips is the narrower part of the strip; at the back, it is the lower part. This is why the parchment strips pulled through the openings do not fall into line. On the spine cover of the book, squares were formed by breaking slightly back the tail and head edges. The cover parchment was lined with paper; the edge of the paper is visible at the damaged section of the turn-in of the right board. Corners of the covering were folded overlapping.

Boards of the parchment binding are paper boards.

The spine of the book is smooth, rounded, it does not have a tight back; it was made without a spine plate. The parchment strips used for sewing slightly bulge through the cover parchment.

There are no fastenings.

The author and title, as well as the collection data of the book had been gilded directly, but with a label-like appearance, on the spine covering of the volume. The ground color of the “labels” was painted apricot, which faded, and the gilding of the frame and text darkened.

When the current binding was made, the quires were sewn all along on three parchment strips with kettle stitches. When sewing, the strips were bypassed, entering in and out of the quire on both sides of the strip, in a way that the sewing thread runs twice in the line of the strip. After sewing, the parchment strips were cut up until the opening, and the narrower strip was pulled through the opening, while the wider one was just cut shorter. After that, both parts of the strip were pasted down on the inner face of the boards.

The spine fields were lined with coarse-woven holland, and the ends reaching beyond the spine were pasted down on the inner face of the boards, in an approximately 1-1.5-centimeter width.

Surface of the parchment sheets used for writing is velvety, the flesh and hair sides

are hardly distinguishable in touch and color. The parchment sheets used for codex writing are almost flawless; repair of parchment made before writing can be detected only in one or two places. Pagination is visible at the upper right corner of the sheets. During the preparation of the parchment sheets, double incised lines were used to mark the text field, and also incised lines marked the location of the writing lines. On the edges of the sheets, rows of pierced holes helped the ruling of the text fields. The row of holes ran only along the length of the text fields at the edge of the sheet, and it was removed intentionally when the book was trimmed. However, they still survived on the edge of some sheets. Piercings, positioned outside the text fields, opposite to each other on the inner and outer margins of the sheets, must have helped the temporary fastening of the sheets, which was indispensable for the preparation of ruling. The catchword placed at the end of the quires had been written vertically under the text field, between the text allocating incisions adjacent to the spine, perpendicularly to the text.

The edge of the codex is gauffered and gilded on all three sides. On the edges, diamond net pattern was formed by the double dot lines, and a four-petalled rosette was gauffered in their divisions. The floral motif consists of four double circles. The edges were framed by double circles tooled next to each other densely. Dense dot lines are running between the central field, decorated with a net of diamonds, and the frame. Gauffering of the edges is significantly deeper than the ones visible on NSZL’s codices with a corvina binding.

The original endleaves at the left board are parchment one-fold endleaves sewn to the quires. No traces of adhesive are visible on the endleaf facing the board, so it had never been pasted down. A faint imprint of ruling can be detected on the one-fold leaves, and a row of pierced holes which helped ruling had also survived on the first leaf. Recto of the second leaf is empty, while the verso, facing the frontispiece, is painted similarly to it.
At the right board, out of the book’s last quire, consisting of four one-fold leaves, the three leaves following the middle of the quire had been cut out, leaving behind a narrow stump. However, the last leaf had been spared in its full size and served as an endleaf. The text of the codex ends on the recto of the fourth leaf of the last quire, i.e. in the middle of the quire. Incision of the ruling is also visible on the last leaf.

Endleaves belonging to the parchment binding had been placed in front of, and behind the original endleaves, leaving their structure intact. The old and the new endleaves were pasted to each other in a narrow width. The new endleaves are two one-fold paper leaves each, sewn to the quires. The leaves of the endleaves facing the board had been cut short, and pasted, together with the paste-down, to the board; the two other leaved are flyleaves. On the paste-down at the right board, dim outline of an angel watermark is visible, with S T W monogram underneath.

The original endband has not survived, only the puncture point and imprint of the core fixing tiedown in the central sheet of certain gatherings refer to its existence. Currently, we can see a two-color endband that was embroidered with turquoise green and raw colors. On making the endband, a narrow parchment strip was held behind the coarse-woven holland core, and then, by going around it, the holland core was fixed with embroidery threads. Out of the cores reaching beyond the spines, the holland core, cut aslant, was pasted onto the inner face of the boards, just like the parchment strip. The latter, however, was pulled through the opening of the book before paste-down. Outlines of the cores pasted down can be detected underneath the endleaf paste-down.

The book has not been restored since it was rebound.