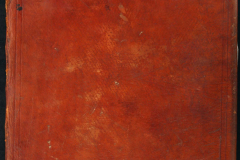 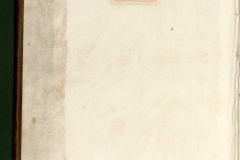 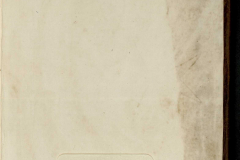 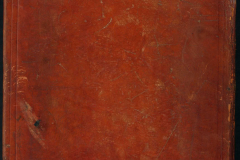 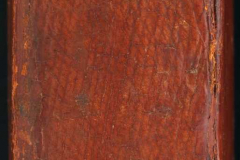 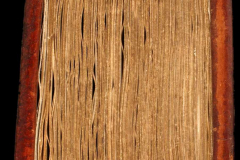 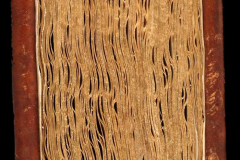 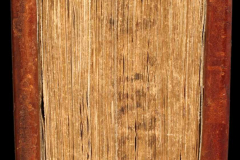 The current full leather binding of the codex is a re-binding, a so-called Tiraboschi binding made in Modena in the last third of the 18th century. The binding is identical with the one of the codex under shelfmark Cod. Lat. 346, kept by National Széchényi Library.

Boards of the modern binding are undecorated, only two blind-tooled lines are running along the edges of the left and the right boards. The framing lines cross one another and they run through to edge of the board. The spine is also undecorated, featuring a gilded, label-like titling at the head. The titling is framed by double gilded wavy lines at the head and tail, and simple ones on the right and left. There is a gilded coat-of-arms at the tail of the spine.

The current full leather binding of the codex is a re-binding made in Modena in the 18th century. Girolamo Tiraboschi (1731-1794), director of Modena-based Estense Library initiated the unification of the library collection between 1770 and 1794, and it was then that several of the books were provided with similar new, red sheepskin binding with gilded spine.

The cover leather is brown full calfskin, the material features a diamond net pattern. Impression of the turn-in of the original leather covering is visible on the first and last sheets. Turn-in of the Modena leather covering has a pared edge; it is free hand trimmed. The corners and the opening of the covering were restored in the Restoration Laboratory of National Széchényi Library in the 1980s, and presumably since then, the parchment endband cores have no longer been pulled through the opening.

Boards of the current, modern binding are made of paper; the corners of the boards adjacent to the spine are mitered. No fixing of the sewing support endings can be detected on the boards.

The book has a tight back, the spine is smooth, rounded.

The current binding does not feature fastenings, and there is no trace of former ones either.

Gilded titling can be read at the head of the spine; the titling is framed by double gilded wavy lines at the head and tail, and single ones on the right and left. There is a gilded coat-of-arms at the tail of the spine. At the tail a titling, written in black ink but by now faded, is visible. Foot of letters faces the right board.

During the making of the current binding, the quires had been sewn all along on six recessed cord sewing supports with kettle stitches. Based on the traces visible on the parchment sheets, the original sewing must have been made on four, as usual in the age, double sewing supports, with the endband core attached to the bookblock in a separate session from sewing. There is no sign of a preliminary marking of the kettle stitches. The first quire consists of five sheets. The last quire consists of four sheets including the last, empty leaf of the bookblock, also serving as an endleaf. Parchment guard folded over the first and last quires can be detected, which was pasted on the quires in an approximately 8-mm width. It must have been part of the folded sewing guard used during restoration. At the end of the quires, at the tail of the spine, a catchword can be found, running perpendicularly to the main text. The text field was marked with incised lines; the catchwords are running between two vertical lines. At the fore-edge of several sheets of the bookblock, a row of holes used to rule the pages is running along the edge of the sheets. Traces of pierced holes, helping the ruling of the text fields, can also be detected on the edges of the sheets. Letters of the collation marks written in ink have survived at the corner of some sheets. The parchment surface was evened under the painted frame.

The edges are gilded and gauffered. At the tail, by the edge ornamentation, titling written in black ink is visible, feet of the letters of which face the right board. Gauffering of the edge broke the edges of the sheets.

The original parchment endleaves at the left board are sewn one-fold endleaves. At the edge of the recto of the first leaf, imprint of the turn-in of the leather covering is visible. On the verso of the second leaf, author’s name and titling framed in a painted, ornamental wreath are visible.

At the right board, no structurally separable endleaves can be detected; there is no text on the last leaf of the quire consisting of four sheets, but it had been ruled for writing.

As part of the Modena binding, the book was provided with new paper endleaves, the structure of which is identical both at the left board and at the right board. Endleaves consist of a paste-down and a flyleaf. The two leaves had been folded into each other, and by forming narrow flaps, they were sewn to the bookblock, that is why no sewing thread can be detected in the opening. On the flyleaf of the endleaves at the left board and on the paste-down of the right board, a Maltese cross-shaped watermark is visible. During restoration, Japanese paper folded over the parchment was placed between the parchment and paper endleaves at the left board. At the right board, similarly, only lacking a parchment endleaf, the Japanese paper was folded over the last quire.

As part of the Modena binding, a red-and-natural color endband was sewn. The endband core was made of parchment, and was attached in a way that several tiedowns were made in the quires with the sewing thread. The core must have been cut in the opening during restoration; it was not pulled through the repaired opening of the binding.

The book was restored in 1981-82 by Mária Czigler in the Restoration Laboratory of National Széchényi Library. The leather binding was repaired; the leather was completed in the opening, at the headcaps and at certain corners. The first and the last quires were detached from the bookblock, and they were re-sewn back. The endleaves were repaired. The spine was lined with holland. The paper label soaked from the spine was repaired, and it was placed in an envelope attached to the paste-down at the right board. The label is the shelfmark label of Biblioteca Modena Estense printed in red (it is identical with the one visible on OSZK Cod. Lat. 346), featuring a shelfmark written in ink.