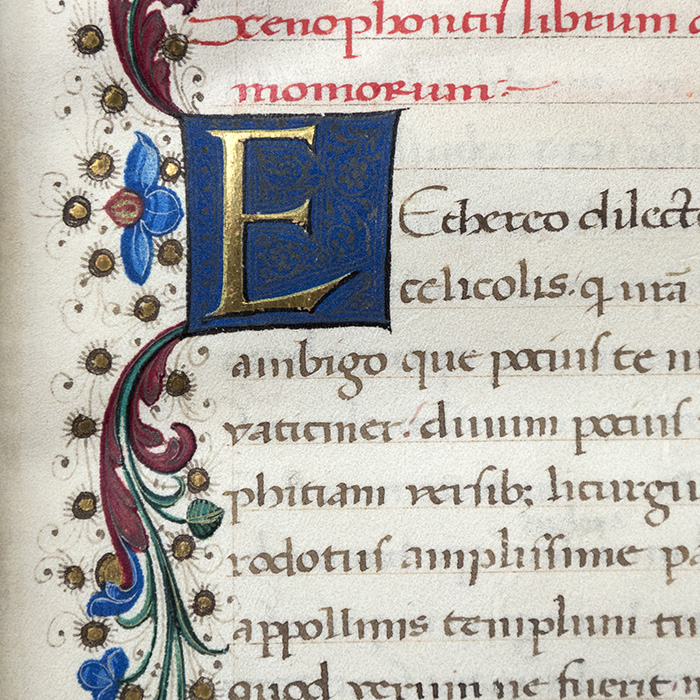 As the title-page of the manuscript is missing, only the binding tells of its being a Corvina. It is an original gilded Corvina binding. The text that reads at the top of the rear binding table, the name of one of the translators, Filelfo and the author, is remarkable and revealing: “Philelfus” and “Scenofote”. (The mark upon the second ‘o’ is for a nasal sound, thus the pronunciation is “Scenofonte”.) In the translator’s name, the author applies a half-Italian variant instead of the regular Latin form (Philelphus), using f for ph; the name of the Greek author is written entirely in Italian. All that proves that the bookbinder was from Italy. An interesting step in the binding process of the Corvinas is recorded by the note “philelphus i Scenofonte” on f55 which means that the bookbinder received the ready-made and ordered quires with a specific written instruction. The author of the note was probably another Italian at the court, a humanist in charge of the uniformization of the library. Nevertheless, the manuscript had been copied much earlier, probably in Johannes Vitez’s environment. The miniature was illuminated by the “First Heraldic Painter”. (The entry written for the guide to the exhibition was made on the basis of Marianne Rozsondai’s and Edina Zsupán’s descriptions below: The CORVINA LIBRARY and the Buda Workshop. Exhibition Catalog. (Publication in progress.) Budapest: NSZL, 2019, Cat. H13)