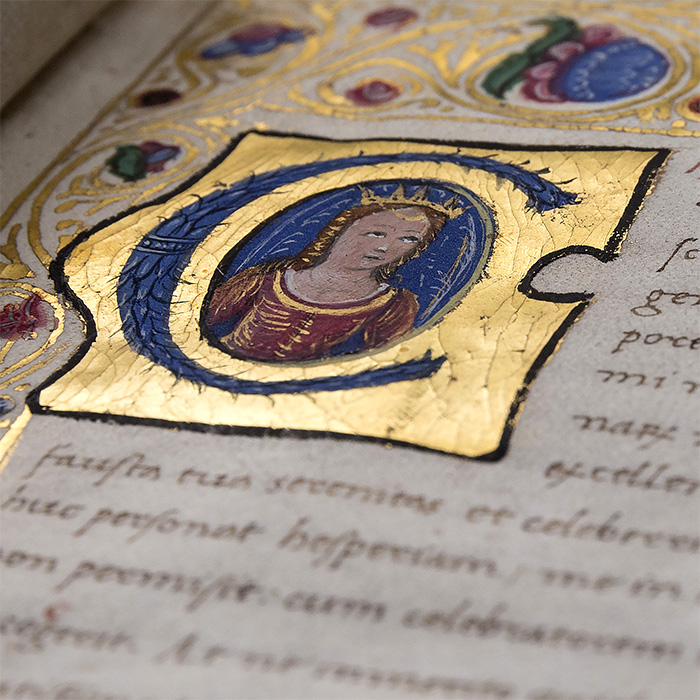 The manuscript is one of those that Bonfini brought to Buda when arrived at King Matthias’s court in 1486 and handed over to Queen Beatrice. Symposion (or banquet, a learned conversation at the dinner table) is a genre inherited from Antiquity that reappeared in the mid-15th century in Milan and soon also in the Neoplatonic circle of Florence that kept close relationship with the Buda court. Several contemporaneous sources point at that learned conversations at the dinner table were regularly held in Esztergom, at the archiepiscopal palace of Johannes Vitez, and the Buda royal court, with the participation of the king, the queen, the Humanist prelates and scholars residing there and Italian guests. The central question of Bonfini’s dialogue is whether virginity or matrimonial purity is the higher virtue. The work in which also the royal couple is mentioned, alludes to that purity is higher, in accordance with Queen Beatrice’s view. The manuscript itself, however, is a problematic piece of the one-time royal library. The decorated title-page proves that it was not a simple text, but a volume meant to be in Beatrice’s library. At the same time, the unpracticed writing and the poor-quality of the title-page illumination, inferior to all the other Corvinas, raises serious questions. As for the handwriting, a contemporaneous note in the codex reads: “Our uncle Bonfini’s own hand”, which can be confirmed by comparative examination. The authorship of Bonfini has also been supposed for the illumination of the title-page, but for that there is no proof, and we can only say that the consciously designed iconography of the page alludes to Queen Beatrice’s situation in the court and the contents of the manuscript. Within the initial letter C, we can see the queen herself, in the center of the border decoration on the right a weasel (the emblem of the order founded by Beatrice’s father) that symbolizes virginity, and at the bottom a phoenix that in addition to resurrection also alludes to purity. At the top, a bee-eater bird decorates the page, with the beak open towards two bees. Bees had been symbolizing virginal purity from ancient times, therefore the bird attacking them may refer to the adversaries of Beatrice in the dialogue. (Ferenc Földesi. The entry written for the guide to the exhibition was made on the basis of Gábor Bolonyai’s description below: The CORVINA LIBRARY and the Buda Workshop. Exhibition Catalog. (Publication in progress.) Budapest: NSZL, 2019, Cat. G2)