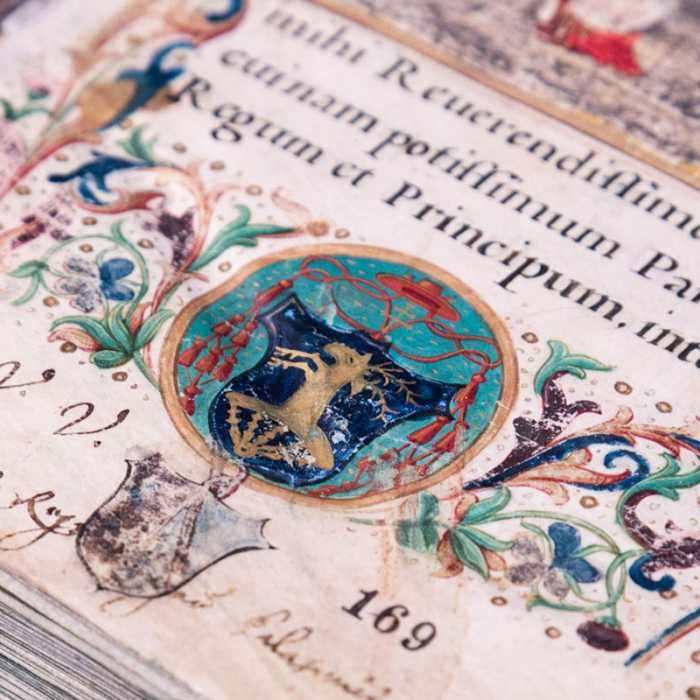 The manuscript is a decorated copy of Ransanus’s work made for the royal library. The core of the text was written in Buda in 1490. The title-page perfectly reflects the period of transition as while on the miniature we can see Matthias and Beatrice, the coat of arms on the bottom left is already of Vladislaus II. Ransanus took the uncompleted manuscript to Italy, and after his death, his nephew Johannes who belonged to the same religious order, found it in his legacy. Johannes added a new preface and in 1513, gifted the volume to Tamas Bakocz who was at that time in Rome on the papal election. That is why we can see the coat of arms of Bakocz on the title-page. The manuscript later became property of the Thurzo family, and palatin Gyorgy Thurzo had it bound in Pozsony before 1611. When his daughter Ilona married Gaspar Illeshazy, the manuscript became a treasure of the Illeshazy family. It cannot be ruled out that Samuel Litterati Nemes, a smart artwork trader who sometimes was not even afraid of forgery, contributed to that the book got out of that library between 1806 and 1832. What we know for certain is that Miklos Jankovich purchased the book from Litterati Nemes, and then it entered the national library together with Jankovich’s collection. (Edina Zsupán)